“It seems inevitable that the life’s adventures of adoptees who have lost all contact with family for a considerable period of time who are eventually reunited with them will one day be listed in the Diagnostic and Statistical Manual of the American Psychiatric Association as victims of Robinson Crusoe Syndrome.” —Judith Land

Robinson Crusoe is one of the most unforgettable stories and widely published books of all time, leading to many sequels, imitators, films and movies. The book is presented as an autobiography of a castaway who spends thirty years on a remote tropical island before ultimately being rescued. 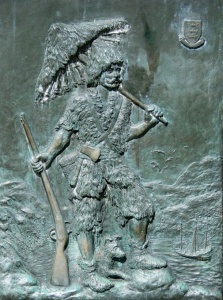 Robinson Crusoe is a novel by Daniel Defoe, first published April 25, 1719, written in a simple narrative style in an epistolary, confessional, and didactic form. It is presented as an autobiography of the title character—a castaway who spends thirty years on a remote tropical island before being rescued by pirates.

Crusoe is a castaway and the soul survivor of a shipwreck, cast ashore and stranded on an uninhabited island that he names the Island of Despair. Fearful of an unknown land, he is afraid and filled with anxiety and spends the first night in a tree. He fears uncultivated land and he learns to achieve order by enclosing it. Eventually, through manly independence, intelligence, calculation and persistence, he gradually modifies the environment, first for protection and then for sustainability and finally for comfort. Faced with numerous emotionally fraught and morally charged situations, Crusoe reveals his heart and motivations and darker reactions to significant events. He becomes very religious after reading from the bible and when he encounters the unconscious cruelty of cannibals, slaves, and pirates, he decides not to hold them accountable because they don’t know any better. He initially ascribes to a doctrine of knowledge and truth but concludes that morality exists in relation to culture, society, and historical context that are not always absolute. He concludes that certain cultural groups have different modes of thought and standards of reasoning that conveys a moral theme and other rich cultural truths that are often ignored.

He is a rugged individualist who is isolated and alone and entirely cut off from his family and native cultural group who is forced to adapt to his foreign surroundings because he has no other choice. His adventure culminates by showing his acceptance of Christian doctrine, intuition of his own salvation, and the importance of providence, penitence and redemption. The story concludes with his deliverance not only from the island, but his spiritual deliverance and cleansing of problems manifested in his life that caused afflictions that oppressed him.

The story of Robinson Crusoe appeals to adoptees of all ages in every culture for obvious reasons—they too must learn to persevere, refashion them, and adjust to the situation and circumstances in which they find themselves in order to survive. They suffer through life’s adventures and brave the pain of lonesomeness. They quietly accept the consequences of their fate in solitude. They must constantly adjust to a shifting and uncertain destiny while experiencing the heartbreak of isolation and the pain of separation from family. They are forced to embrace local customs, conform to the traditions of religion, learn the language of the adoptive culture, and adjust to the subtle nuances of the environment and geography in which they find themselves. After thirty lonely years of cloistered obscurity in the back of beyond, imagine what it is like for them to feel the joy of being rescued and reunited with the past; an experience that can be overwhelmingly fascinating, like walking backwards through a very long tunnel to rekindle ancient memories, that can either warm them up from the inside or burn them.

Judith Land lives in Colorado and Arizona with husband and coauthor Martin Land. Judith is a former nurse, retail shop owner, college instructor and avid outdoor person. Her book "Adoption Detective: Memoir of an Adopted Child" is a true story detailing the journey of Judith Romano, foster child and adoptee, as she discovers fragments of her background, and then sets out to solve the mystery as an adult. She has reached readers in 192 countries. "Mothers and fathers everywhere in the world need to understand that children are forever and always." --Judith Land
View all posts by Judith Land →
This entry was posted in Adoption, Children, Parenting and tagged ADOPTION, Adoption Detective, children, Judith Land, Parenting, Robinson Crusoe Syndrome. Bookmark the permalink.