“Pain is a multidimensional experience with numerous areas of the brain activated. If pain following trauma is the fault of another person, the brain’s response is heightened; recovery is hindered and the risk of pain and disability in the years ahead is significantly higher.” Judith Land 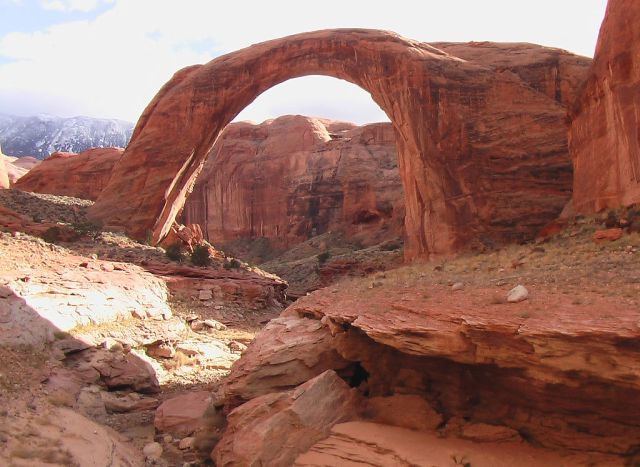 “If a child is separated from a parent, how much psychological pain will they experience, and how much post traumatic stress will they endure? The brain’s ability to modulate pain has been shown to vary, not only between individuals, but also within an individual over time. This is partially based on the context of the painful childhood separation experience.” Judith Land

How does it feel to be an adoptee?

Adoptees suffer a major psychological loss at the initial separation from the birth family. Even if the loss is beyond conscious awareness, recognition, or vocabulary, it affects the adoptee on a very profound level. The grief process is further complicated by the fact there is no closure to the loss experience, all subsequent development is affected. Some adoptees are able to cope with this change in self-identity and move on with their lives, while others seem to be emotionally afflicted with the loss for an entire lifetime.

Rainbow Bridge is the largest natural bridge in the world, an ancient tribute to the forces of nature, a beautiful rainbow frozen in stone, located in Forbidding Canyon, Lake Powell, Arizona. While hiking to the famous arch, a man standing beside me paused to take a picture. Unaware of his perilous location, he lost his balance and tumbled into the canyon abyss. My husband and I climbed down the rock wall to provide emergency assistance. The victim’s lower leg had been brutally torn from the man’s body and was lying caddywampus on the rocks beside him. We wrapped a leather belt around his thigh to form a tourniquet to stop the bleeding. While performing this life-saving action, resuscitation and first aid, the man smiled and remarked, “Don’t worry about me, I’ll be fine.” Apparently, he felt no pain because the nerves in his leg had been completely severed.

Some adoptees in denial react in much the same way—the umbilical cord is severed. They say they feel no pain. They claim to lack any sense of loss, attachment disorder, anxiety, or fear of separation. Confident in their artificially altered self-identity, they claim to be free of mental angst. They are content with their inner self, current situation and relationships. Pain is an aberration. They are happy with the adoptive experience and the outcomes they have achieved. They do not assign blame. They give little thought to the past or the cause of the drastic change in their life trajectory.

Whereas, other adoptees appear to develop profound life-long afflictions, feelings of dread and deep anxiety about their life, circumstances surrounding their birth, and family relationships. They suffer from chronic Post Traumatic Stress Disorder, combined with the unbearable anguish of life without the hope of overcoming this seemingly impossible situation. Life becomes a struggle dealing with the emotional burdens of separation that weigh heavily on the dispossessed, not knowing when salvation will appear.

Pain is more than just a sensation indicating tissue damage for victims of post traumatic stress disorder: it is a multidimensional emotional experience triggered by intense emotions and strong feelings of being wronged, as well as mental and bodily harm. Numerous areas of the brain are activated. The brain’s ability to deal with physical and emotional pain has been shown to vary between individuals and over time. This is partially based on the context of the painful experience and whether pre-existing psychological blame is present. Those who blame others for their emotional pain are more prone to persistent long-term suffering, disability, and delayed healing. Seeking comfort by excessive eating, drinking, and compulsive habits, hampers rather than helps their self-esteem.

There are many predictable behaviors known to be related to adoptive status, including complex psychological problems in bonding and attachment disorders. The anxiety of separation resulting from adoption can be so intense in some cases that it causes severe reoccurring distress that affects social, occupational, and academic functioning. Regardless of how individuals outwardly respond to these circumstances, through denial or acceptance, the process of adoption is a lifelong adjustment with many of the emotional problems associated with the slow pain of a broken heart and psychological stress reoccurring and manifesting itself throughout an adoptee’s entire life, particularly during milestones, and times of emotional distress.

Adopted Child Syndrome is a condition that may not be properly diagnosed in many people. Even when diagnosed correctly, depression often goes untreated with many individuals left to deal with complex psychological issues on their own. The ineffable sense of loss of a mother for some adoptees is beyond the pale, beyond words, inexpressible, and indefinable. The mythical image of a wandering soul hoping to reunite with a significant other is every bit as emotionally complex and painful as the loss of a severed limb that can never be resolved.

Judith Land lives in Colorado and Arizona with husband and coauthor Martin Land. Judith is a former nurse, retail shop owner, college instructor and avid outdoor person. Her book "Adoption Detective: Memoir of an Adopted Child" is a true story detailing the journey of Judith Romano, foster child and adoptee, as she discovers fragments of her background, and then sets out to solve the mystery as an adult. She has reached readers in 192 countries. "Mothers and fathers everywhere in the world need to understand that children are forever and always." --Judith Land
View all posts by Judith Land →
This entry was posted in Adoption, Children, Dear Adoption, Life, Parenting and tagged ADOPTION, Adoption Detective, adoptive child syndrome, children, Judith Land, post traumatic stress disorder. Bookmark the permalink.

1 Response to Adoption—How does it feel?